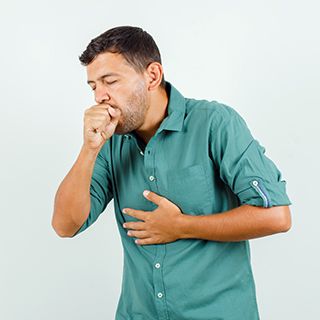 Haemoptysis is referred to the coughing up of blood or blood-stained mucus that originates from the bronchi, trachea, larynx or lungs. This can be due to lung cancer or other infections that include bronchitis, tuberculosis, pneumonia and other cardiovascular conditions. It can lead to serious medical conditions and also be life-threatening.

What are the symptoms of Haemoptysis?

The most common symptoms of Haemoptysis are –

Who are more predisposed?

Gender – Both male and female smokers are likely to suffer from haemoptysis then non-smokers. Women smokers have reported having a higher death rate due to haemoptysis than men

Age – Adults and older adults are more prone to suffer from haemoptysis owing to their habit of excessive smoking and an unbalanced lifestyle.

Dr. Amitabha Saha is trained in treating Haemoptysis (blood-stained mucus). His process involves an analysis of the symptoms, evaluation of the severity of the disease, medical tests to confirm the condition and spread of the disease, surgery (if required), counselling and medication.