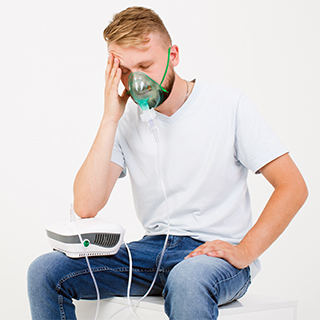 The chronic obstructive pulmonary disease commonly known as COPD is a branch of progressive lung disorders with common conditions such as chronic bronchitis and emphysema. Emphysema is known to slowly destroy the air sacs in the lungs which disturbs outward airflow whereas Bronchitis leads to inflammation and narrowing of the bronchial tubes that enable mucus build-up and disturb smoother air movement.

The primary cause of COPD is known to be excessive tobacco smoking and long-term exposure to certain chemical irritants. As of now, there is no such a cure for chronic obstructive pulmonary disease, however, specific treatment can ease symptoms and lower the chances of complications that can improve the quality of life.

If left untreated, COPD can lead to severe diseases such as heart problems and respiratory infections that can also be life-threatening.

What are the symptoms of COPD?

The most common symptoms of COPD are –

Who are more predisposed?

Gender – Both female and male smokers are likely to suffer from COPD that may result in death than the ones who had never smoked. Nevertheless, it has been noted that more women die due to COPD than men.

Age – People aged 40 or older are at a higher risk of suffering from chronic obstructive pulmonary disease than the ones aged below 40. However, people below 40 but with excessive consumption of tobacco smoking can be prone to be affected by such conditions.

Patients suffering from the chronic obstructive pulmonary disorder (COPD) can get in touch with Dr. Amitabha Saha for quality treatment of their condition. Quality medical training, years of experience and compassion for offering people top-notch medical help have helped understand the requirements of the patients and their suffering. Close analysis of the symptoms and diagnosis helps in understanding the cause behind the disease facilitating treatment and prevention.